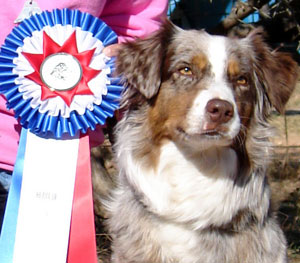 retired and spayed, lives on a farm in Maryland with my good friends. 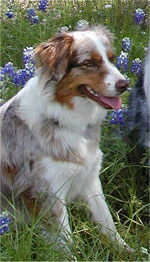 A flashy red merle female that is very willing to please.  Luca has lots of eye and a wide outrun.  She has good balance and rates her stock well.  A tough little dog when necessary; Luca is especially keen on her cattle, hitting heads and heels, and always a willing, biddable partner.  She is also wonderful with my young daughter; very patient, playful, and loving.

Luca started her trial career with a bang!  She was entered in her first competition at SWASA’s trial (Stonewall, TX).  Her first day ever competing, she won all three of her classes, won High Started dog, and Most Promising Started Aussie.  Luca won most of her classes in the next two trials she competed in as well as High Score Open Dog.

Luca has a lot of talent.  She competed in the 2005 ASCA National Finals and earned 4th place cattle and ducks.  Then, she placed 2nd in cattle at the Nationals trial.  In 2006, she was an ASCA Finals qualifier on all 3 stock with very high Merit standings and finished 7th in the nation on sheep despite recurring troubles from a leg injury sustained in 2004.  She is now retired.

Luca earned her ASCA Hall of Fame Dam #326 in 2010.  Her offspring are succeeding in multiple venues.  We are very proud of Luca’s offspring and their owner/handlers!   The three dogs that qualified Luca for her Hall of Fame title were Addie, Liv, and Eli.  Many thanks go to those handlers for all their hard work!